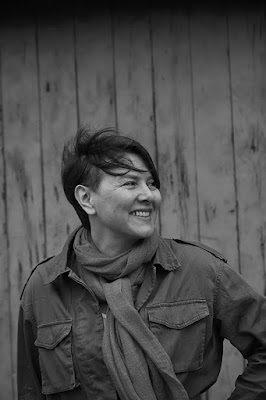 Heather Birrell [pictured] is the author of two story collections, both published by Coach House Books: Mad Hope (a Globe and Mail top fiction pick for 2012 and a “CanLit cult classic,” according to 49th Shelf) and I know you are but what am I? Heather’s work has been honoured with the Journey Prize for short fiction and the Edna Staebler Award for creative non-fiction and shortlisted for the KM Hunter Award, the Arc Magazine poem of the year award, National and Western Magazine Awards (Canada), and received a notable mention in Best American Essays 2017. Heather works as a high school English teacher and a creative writing instructor in Toronto, where she lives with her family. Float and Scurry (A Feed Dog Book from Anvil Press) is her first poetry collection. Learn more about Heather and her work at www.heatherbirrell.com

Michael Blouin has won ReLit Best Novel in Canada, been shortlisted for the Amazon First Novel Award, the bp Nichol Award, the CBC Literary Award, and is a winner of the Diana Brebner Award and the  Lampman Award. He has collaborated on recent projects with poet Gillian Sze, film director Bruce McDonald, poet and artist bill bissett and visual artist and author Elizabeth Rainer. He has been published in most Canadian literary magazines including Arc, Descant, Branch, Dragnet, The Antigonish Review, Event, Queen's Quarterly, Grain and The Fiddlehead. He has received rave reviews from The National Post, The Ottawa Citizen, The Chicago Institute for Photography and Literature, The Ottawa International Writers Festival, SubTerrain Magazine, Broken Pencil Magazine, Ottawa Magazine, This Magazine, The Telegraph Journal, Lynn Crosbie, bill bissett, Emily Schultz, Susan Musgrave, Marilyn Bowering, George Fetherling, Phil Hall, Sean Wilson, Paul Gessell, rob mclennan, Alejandro Bustos, Melanie Jannisse, Catherine Owen and Lisa Moore. He has served as an adjudicator for The Canada Council, The Ontario Arts Council, The Ottawa Book Awards, Carleton University and This Magazine. His most recent work is in the Summer 2017 issue of Arc Magazine. Forthcoming are material in Taddle Creek Magazine, the anthology The Group of Seven Reimagined: Contemporary Stories Inspired by Historic Canadian Paintings and the novels Skin House, and I am Billy the Kid.

Vincent Colistro's poems have appeared in The Walrus, Hazlitt, Geist, Arc and elsewhere. He was a prize-winner in the 2012 Short Grain contest, and was nominated for National Magazine Award for Poetry in 2014. Late Victorians (Signal Editions, 2016) was his first book, but his new chapbook Mountain Fountain Font (Odourless Press, 2019) is what he's currently excited about.

Amanda Earl writes in Ottawa, and occasionally other places. She’s the managing editor of Bywords.ca and the fallen angel of AngelHousePress. Kiki (Chaudiere Books) is now available from Invisible Publishing. For more information, please visit AmandaEarl.com or connect with Amanda on Twitter @KikiFolle. Her latest chapbook, and her seventh from above/ground press, is Aftermath or Scenes of a Woman Convalescing (2019).