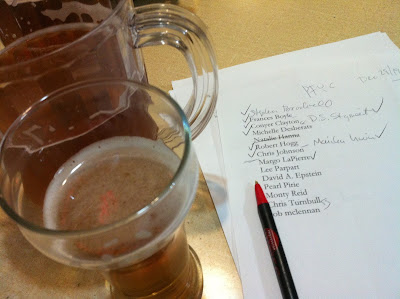 How many years have we been doing this now? The first holiday season event we did was most likely back in 2005, so we’ve been doing this for some time, and this past Saturday night was brilliantly fun, with a more lively crowd than usual, and readings by Yacht Club regulars and irregulars Stephen Brockwell, D.S. Stymeist, Frances Boyle, Conyer Clayton, Michelle Desbarats, Robert Hogg, Marilyn Irwin, Chris Johnson, Margo LaPierre, myself, Lee Parpart, David A. Epstein, Monty Reid and Chris Turnbull, who was accompanied by the pre-recorded voice of collaborator Bruno Neiva.

As part of my introductions, I spoke of how The Peter F. Yacht Club originally began as an informal group that met to discuss writing back in 1999, morphing into a journal back in 2003 (which still produces an issue for each edition of VERSeFest). One could describe the entire history of The Peter F. Yacht Club as a way for a small group of us to engage with each other’s work, and get a sense of what each other’s current projects might be. So, what are you working on? 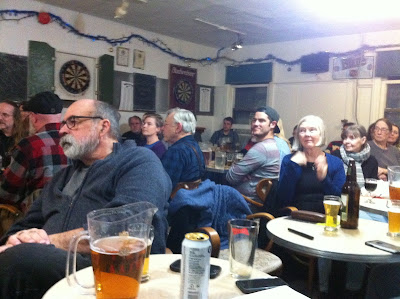 The room was packed! It was good to see so many people I feel I haven’t seen in some time, including Pearl Pirie, Jennifer Pederson, David O’Meara, Rachel Zavitz, Jean Van Loon, Grant Wilkins, Laurie Koensgen, Cathy McDonald-Zytveld and Mia Morgan. Unfortunately, Christine McNair and natalie hanna had to send their last-minute regrets (and were missed, obviously).

What was interesting, also, was that Craig Carpenter, a poet I haven’t seen or heard much from in some twenty years (since he left Ottawa for parts unknown) appeared out of the ether to record the audio of the event. The final editor of the late, lamented Carleton Arts Review back in the late 1990s (not long after my own tenure as same), he was in Ottawa throughout the 1990s in part as a student at Carleton University, writing poems as a member of Jim Larwill’s informal writing group, the OmniGothic NeoFuturists (you’ll have to find Jim to find out what he thought that all meant). Apparently Carpenter is currently in Kelowna, British Columbia at UBC, working with Karis Shearer, and assisting in digital transfer of literary readings from dozens of archived cassette tapes (etcetera).

Stephen Brockwell opened the event with three really sharp poems produced in homage, including one for Stuart Ross [one of the readers at last year’s event] and another for his mentor, Peter Van Toorn, all of which I hope to see in print soon. How does his work manage to remain so sharp? D.S. Stymeist, author of a debut collection from Frontenac House, read a couple of poems from his current work-in-progress, resting behind the bar for both support and added effect. Frances Boyle included a couple of poems from her new poetry title, This White Nest, recently out with Quattro Books (and she has a collection of short stories out this spring with The Porcupine’s Quill, Inc., also). And Conyer Clayton read from a selection of prose poems, including from her most recent above/ground press title (and did you know she has a full-length debut out this spring?).

Michelle Desbarats is utterly delightful, and it was grand to hear her read from new poems, especially with the admission that she is working on a new manuscript. Can it already have been more than twenty years since the appearance of her debut? I would love to be able to produce another chapbook as well (to follow this one I produced around the same time as her debut). I’ve also been very pleased to see the re-emergence of Robert Hogg over the past couple of years [see my review of his two latest chapbooks here], and his poem playing with the Robert Creeley phrase, “Dig-it,” was amazing.

Chris Johnson read two poems that included raccoons. Is this a new theme, a new thread, emerging in his work? And Margo LaPierre read some new poems that sparkled. I’ve only heard her read a couple of times now, so clearly need to hear further, to get a better sense of what it is she’s working on. I also read a couple of poems, from my work-in-progress “Book of Magazine Verse” [some poems from the same manuscript live here], including one for Frank O’Hara’s birthday (which I have already scheduled to post on my own blog in March, for O’Hara’s actual birthday; watch for it).

Lee Parpart was in town from Toronto, and read a couple of poems, which was fun, as did her American pal, poet David A. Epstein, who not only read a couple of curious poems, but offered an invitation to us Ottawa “Peter F. Yacht Clubbers” to their Connecticut Yacht Club. Oh, the boating we could do. And Monty Reid regaled us with a sequence around sex, constructed from stories heard and collected.

The collaboration between Chris Turnbull and Portugese poet Bruno Neiva sound fascinating (apparently there’s already a chapbook produced of such I have yet to get my hands on); Chris was able to provide some audio of Neiva reading some selections from their work-in-progress, and then Chris read a couple.

It was a grand event! I am very pleased, and also, very exhausted. And then a group of us landed downstairs, for lengthy conversation and hijinks. How did I only manage to get home at 1:30am?