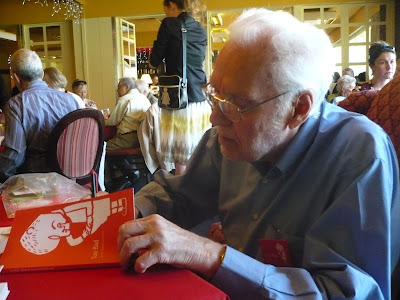 In case you weren't aware, the 2017 Canadian Literature Symposium at the University of Ottawa is this weekend: Robert Kroetsch: Essayist, Novelist, Poet. Running from April 27-30, 2017, presenters include a variety of above/ground press authors (and non-authors), including panelists, presenters and chairs Nicole Markotić, Jennifer Baker, Rudy Wiebe, David Eso, Cameron Anstee, Claire Farley, Dennis Cooley, Aritha van Herk, Robert Stacey, Phil Hall and others. I even have a couple copies left of Robert Kroetsch's above/ground press chapbook, as well as the memorial chapbook we put together for him, if such appeals. Apparently the public is more than welcome to attend, and you can see the full schedule for the conference here.

And: I took this photo of Robert Kroetsch during our shared University of Alberta Press on-campus book launch, April 2010.
Posted by rob mclennan at 12:58 PM