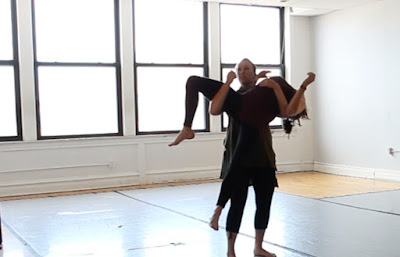 Come back to the space
where we were so close

Tell us again how you know

how you submerged us
how we re-wrote the movement of sidewalk and street
how it bent up to meet us
how our cries made a body an earthquake
What was that chain reaction?


Notes on the Composition

“Grapple” was written as a multidisciplinary poetry-dance work in collaboration with the Coincidentals, Chicago choreographers and dancers Jamie Corliss and Lydia Feuerhelm. Initially the dancers drew inspiration from a photo by Shayna Stacy of an arrest of a young African American man during a protest as part of Moral Mondays Illinois in Chicago in November of 2015. The text then incorporated ideas from the image alongside source material and videos provided by the dancers. Together, we adapted the structure of the poem to inform the building of the dance, so that the two work with and against each other. Using spoken text and movement, the resulting piece evokes the complex physicality of the act of protest where intimacy and aggression overlap. Street protest occupies a unique space in contemporary society, where strangers are fueled by a shared urgency, where limpness and release take the form of strength, where people defy norms by being so close. Rather than address the politics of protest, the piece in performance addresses the energy and feeling of these movements in a corporeal sense. It examines how physicality in protest exists in seemingly contradictory ways: bodily weakness can be an act of strength and physical closeness can unify or it can assert power hierarchies.

“Grapple” was first performed in Chicago as part of the Mess Hall series in August 2016.

Carrie Olivia Adams lives in Chicago, where she is a book publicist for the University of Chicago Press and the poetry editor for Black Ocean. She is the author of Operating Theater (Noctuary Press 2015), Forty-One Jane Doe’s (book and companion DVD, Ahsahta 2013) and Intervening Absence (Ahsahta 2009) as well as the chapbooks An Overture in the Key of F (above/ground press 2013) and A Useless Window (Black Ocean 2006).

This is her second chapbook with above/ground press, after An Overture in the Key of F (2013).