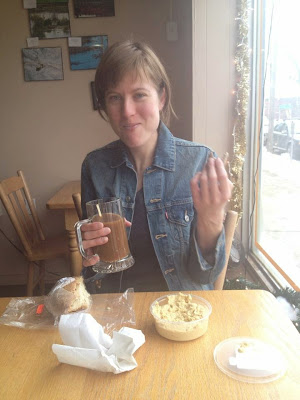 Stuart Ross published his first literary pamphlet on the photocopier in his dad’s office one night in 1979. Through the 1980s, he stood on Toronto’s Yonge Street wearing signs like “Writer Going To Hell,” selling over 7,000 chapbooks. He is the author of more than 15 books of fiction, poetry and essays, most recently Further Confessions of a Small Press Racketeer (Anvil Press, 2015) and A Hamburger in a Gallery (DC Books, 2015). Stuart’s many chapbooks include three released in 2014—Nice Haircut, Fiddlehead (Puddles of Sky Press), A Pretty Good Year (Nose in Book Publishing) and In In My Dream (BookThug)—and others from Room 3O2 Books, The Front Press, Apt. 9 Press, Silver Birch Press, Pink Dog Press and his own Proper Tales Press, which he launched 36 years ago. He is co-translator of My Planet of Kites, by Marie-Ève Comtois (Mansfield Press, 2015). Stuart is a founding member of the Meet the Presses collective and has his own imprint, “a stuart ross book,” at Mansfield Press. Stuart lives in Cobourg, Ontario, and blogs at bloggamooga.blogspot.ca.
Posted by rob mclennan at 1:44 PM