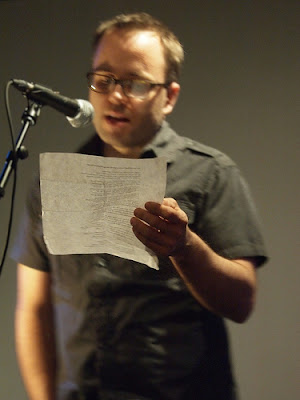 Steven Artelle's [pictured] writing has been published locally in Bywords Quarterly Journal, Ottawa Arts Review, and ottawater, and throughout Canada in journals including Vallum, FreeFall, and upcoming works in filling Station.  In 2013 his "Chinatown Zodiac" series will be part of a month-long exhibit during the Chinatown Remixed festival, and he will also have a chapbook, Four Hundred Rabbits, published by Angel House Press.  He recently completed a collection of poems entitled Metropantheon.

Liz Worth is an author and performance poet. Her first book, Treat Me Like Dirt: An Oral History of Punk in Toronto and Beyond (Bongo Beat/ECW Press) was the first to give an in-depth account of Toronto’s earliest punk scene. She has also written a poetry collection called Amphetamine Heart (Guernica Editions) and three chapbooks, Eleven: Eleven, Manifestations, and Arik’s Dream. She is also one-half of a band called Salt Circle. Check her out at www.lizworth.com

Kanina Dawsons’s work has appeared in a variety of Canadian literary publications, including Prism International, subTerrain, Descant, The Malahat Review and Event Magazine.  She has been awarded numerous prizes for creative non-fiction and was twice nominated for a National Magazine Award.  Kanina’s first book of poetry, Masham Means Everything, appeared this spring with Coteau Books.

Bardia Sinaee lives in Toronto where he works at a bookstore. His poems have most recently appeared in The Puritan and The Walrus. He runs a micro-publishing outfit called Odourless Press.

Michael e. Casteels has self-published over a dozen chapbooks of poetry and artwork. His poetry has also appeared in: 529 (Proper Tales Press), Sterling Magazine, The Undergraduate Review, Incongruous Quarterly, In/Words That Not Forgotten (Hidden Brook Press) among others. He was nominated for the emerging artist award in the 2012 Premier's Awards for Excellence in the Arts. Currently he lives in Kingston, Ontario where he works as a Registered Massage Therapist and runs Puddles of Sky Press.

check here for information on the spring 2013 edition of the ottawa small press book fair, happening from noon to 5pm on Saturday, June 15 at the Jack Purcell Community Centre;
Posted by rob mclennan at 10:59 AM