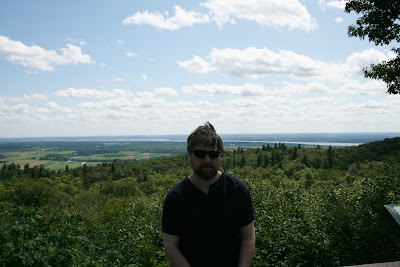 Rob Manery studied with Bob Hogg at Carleton University in the 1980s. In response to Rob’s complaint about contemporary poetry, Bob suggested that he should read the Language poets. This suggestion lead to Rob’s continuing interest in the possibilities and limits of meaning-making. It also lead to his collaborations with Louis Cabri, hosting literary events, including Bob Hogg’s seminar on Charles Olson’s The Special View of History, and then publishing hole magazine and hole books. Rob has published one book of poems, It’s Not As If It Hasn’t Been Said Before (Tsunami Editions). He currently teaches academic writing at Simon Fraser University where he is pursing a doctorate in education.

He will be launching the chapbook Richter-Rauzer Variations (above/ground press), sections of which appeared in ottawater #8.

Robert Hogg remembers well the night in 1960 when poetry became something utterly vital, visceral and necessary to his soul. He and Frank Davey had heard Robert Duncan read from The Opening of the Field. Hogg was transported: “It utterly blew me away. And I realized that I had to create something like that or life would not be worth living.” Hogg went on to complete his BA at UBC, where he became an integral member of the TISH movement. He holds a PhD in English literature from SUNY Buffalo; has taught at Carleton University in Ottawa; and has published five books of poetry.

http://www.thecapilanoreview.ca/there-is-no-falling-robert-hogg/
Posted by rob mclennan at 11:12 AM