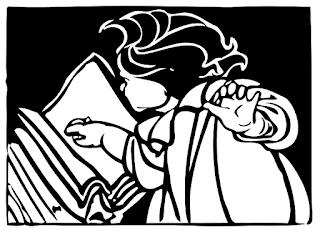 If you picked any story but this,
I wouldn’t know where to begin.

A young doe in my garden looks up;
How the mind seeing, loses sight.

Inside where I stand, one cobweb on the ceiling
Delicately twists when the furnace comes to life.

What if I turned my face away
And when I looked back you were gone?

The freezing mud in the driveway
Seizes the tires in their ruts overnight.

I wish for multiple eyes like a spider,
My forehead of shining cobblestones.

Eric Folsom writes poems, works at the Kingston Frontenac Public Library, and occasionally bakes cookies. He has written a handful of poetry books, including Icon Driven (Wolask and Wynn, 2001) and Poems for Little Cataraqui (Broken Jaw, 1994). He helped edit the literary magazines Next Exit and Quarry, served as the Ontario rep for the League of Canadian Poets, and has hung around in Kingston, Ontario since 1974. He was told once he looks pretty good for his age. In 2011 the Kingston City council appointed Eric as Kingston's first Poet Laureate.

Eric Folsom reads in Ottawa on Saturday, September 17, 2011 as part of a League of Canadian Poets benefit.
Posted by rob mclennan at 12:01 PM