There was a rock rumoured to grow
one inch every year.
It was a letdown.
The heath once housed
a witch
but then they built the church
so she became some nightjars
and took off.
It’s something we do
in the countryside.
We don’t grow a great deal
and depart
when the birds we’re made of
have had enough. 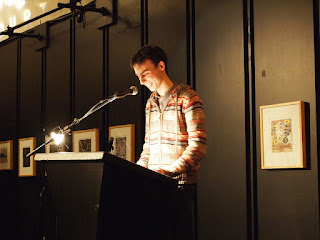 published in Ottawa by above/ground press
in an edition of 200 copies, May 2011
a/g subscribers receive a complimentary copy
write for submission/subscription info, c/o 858 Somerset Street West, main floor, Ottawa ON K1R 6R7,
or check out rob_mclennan@hotmail.com or abovegroundpress.blogspot.com
To order, send cheques (add $1 for postage;
outside Canada, add $2 & in US $) to: rob
mclennan, 858 Somerset Street West, main floor,
Ottawa Ontario Canada K1R 6R7.
After a year spent living and working in various towns throughout England, Ben Ladouceur spent the summer of 2010 employed at a youth hostel in the hamlet of Blaxhall, Suffolk. He is now living back in Ottawa, his hometown. His poetry has most recently been featured in Ottawater, Cadaverine, and the anthology Pith and Wry: Canadian Poetry (Scrivener Press, ed. Susan McMaster, 2010). Previous chapbooks include: Nuuk, In/Words Chapbook Series, 2008; Alert, Angel House Press, 2009; The Argossey, Apt. 9 Press, 2009; The Bottom of the Sea, The Moose & Pussy, 2011
Posted by rob mclennan at 11:29 AM