above/ground press authors Renée Sarojini Saklikar's After the Battle of Kingsway, the bees— (2016) and Dana Claxton's THE PATIENT STORM (2016) are on the 2017 bpNichol Chapbook Award‏ shortlist! 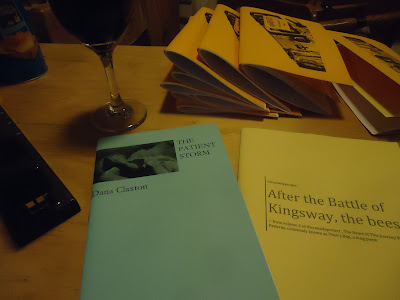 It has just been announced! Congratulations to Renée Sarojini Saklikar and Dana Claxton for making the shortlist to the 2017 bpNichol Chapbook Award [and of course, both Renée Sarojini Saklikar's After the Battle of Kingsway, the bees— and Dana Claxton's THE PATIENT STORM are still in print]! I'm in the midst of chapbook making (that might even be a Sacha Archer title in the background I'm stapling...), so am taking but a small pause with wine to hoist to the shortlisted authors. Congratulations, all!

This is above/ground press' fifth appearance on the bpNichol Chapbook Award shortlist over the past six years, after Jason Christie's Cursed Objects (2014) and Ben Ladouceur's Lime Kiln Quay Road (2014) made the 2015 list, Christie's Government (2013) made the prior year's list and Fenn Stewart's An OK Organ Man (2012) made the list before that, and Hugh Thomas' Opening the Dictionary (2011) and Elizabeth Rainer and Michael Blouin's let lie/ (2012) were shortlisted the year prior to that. So many lists!

Looking forward to this year's Meet the Presses to hear the winner! You should totally come by and say hello and even pick up copies of these shortlisted titles? The press release for such is below (and at this link):


TORONTO – October 17, 2017 – Tonight, at a Toronto event paying tribute to the late poet bpNichol, the Meet the Presses collective announced the finalists for the 2017 bpNichol Chapbook Award. The prize, awarded annually since 1985, goes to the author of the best poetry chapbook – in the estimation of the judges – published in Canada in the previous year and submitted for consideration. It is named in honour of the late poet, novelist, mentor, and micropress publisher bpNichol (1944–1988).

The $4,000 prize purse, donated by an anonymous benefactor, makes this the richest annual literary award for a poetry chapbook, specified as a collection of no more than 48 pages. The publisher of the winning title also receives $500, thanks to an annual donation by Toronto writers Brian Dedora and Jim Smith.

Judges Helen Guri of Montréal, Québec, and Hoa Nguyen of Toronto, Ontario, chose the finalists from more than 60 submissions from across the country.

The finalists for the 2017 bpNichol Chapbook Award are:

The winner will be announced at 2 p.m. on November 18, 2017, at the annual Meet the Presses Indie Literary Market, open from 12 noon to 5 p.m. at Trinity-St. Paul’s Centre, 427 Bloor Street West, in Toronto. The Market introduces the public to independent literary publishers of books, chapbooks, magazines, ephemera, and recordings generally not available in bookstores. The free event is curated by Meet the Presses, a volunteer literary collective devoted to showcasing the work of independent publishers of fiction, poetry, and creative non-fiction.

More details can be found at meetthepresses.wordpress.com.

For more information and interview opportunities, contact the publicist for Meet the Presses: Zarmina Rafi at rafi.zarmina@gmail.com